If you look up odd things on a google search, you will find a plethora of some very strange things and some things that are quite ordinary.  I was looking to see if I could find a picture of something odd in order to write a fictional story using that as my prompt.  Instead, of finding what I was looking for, I found crazy things to write about.  Take this picture for example.  How could I even begin to explain this? 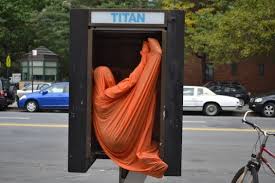 Why would you do this?  If you were hiding from something or someone, I hate to tell you that your bright orange sack of clothing is hanging out the end of the booth.  It just isn’t working for me.  And what is that orange outfit thing?

Here’s another great one.  Great odd jobs.  This is definitely one I would steer clear of.  Why would anyone put themselves into the position of sniffing someone’s armpits? That’s just disgusting.  I  suppose they are  smelling for pheromones or some such silliness, but how gross to have a job of sniffing sweaty pits!!

Then we come to this little odd gem.  Oh yes, I’m certain that some strange individual would love to have a table like this in their boudoir.  I, for one, am not one of them.  I mean, seriously, a table with feet, and socks?  The socks don’t even match.  Well, they sort of match, but really, a table with feet?  Especially not to put my fruit on.  I think the part that makes this table stand out to me in such a yucky way is the fact that it has “legs”.  And only one sock is mismatched.  I mean, if you’re going to make that much of an effort, match the damn socks, people.  That just seems weird to me, but I’m a little odd myself.

Then we come to the not so very odd pictures found on the odd picture search.  Seriously can’t imagine what they are thinking when they can actually put something as mundane as this next one in the same category as “odd” seeing some of the other finalists.  I haven’t even shown you some of the more risque ones, as I like keeping this blog at least PG in rating.  This is simply an odd apple among the rest.  Poor little apple.  I could help.  I’d eat it and then it wouldn’t be the odd man out anymore.   Problem solved.  Too brutal?  I think not. 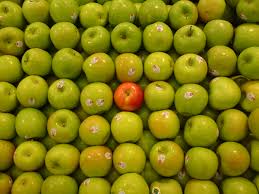 I know you are all pondering what has gotten into me that I would post such ODD nonsense.  Well, I was in the mood to write a really good fictional story and I couldn’t find a picture.  If you find a picture and want me to write a story around it, I would love to.  Or if you have an idea, I’ll use that too.  I guess today, I’m just in an ODD mood.  How about you?  Hope you are enjoying a lovely weekend!

2 thoughts on “The Oddities in Life”