This morning, my husband found our little hamster, Bandit cold and limp. A life ended. A very short life at that. We didn’t have her a week but I had my suspicions that she wasn’t well when the kids brought her home. She didn’t suffer, she just passed away quietly in her sleep in her favorite place. Poor little might.

The only thing I can say that was merciful is that we hadn’t the time to become too attached to her. My little man, the nearly 9 year old, was upset and as usual in his dealing with death, wouldn’t go near her little dead body. He doesn’t want to deal with sadness. Ever since losing mom last November, Liam is afraid of death and being sad. He’s afraid of grief.

This is not something you can force a child his age to deal with either. He just simply wants to move on. We try desperately to help him. We’ve tried talking to him and reading books, but he will just walk away. Hopefully in time, when he’s ready, he will come to us. Until then? We wait.

Our two little squirrel friends are still with us. Felix is not doing well though. I’ve prepared Liam for this by talking to him. Felix has been the weaker of the 2 babies. His breathing and muscle control is remarkably declining and my heart is broken.

Dexter, on the other hand, is thriving! He is climbing all over the cage, eating great and just doing everything he should be doing. It’s so hard to raise wild animal babies knowing that the chance of survival is always risky at best. We knew the odds were against Felix from the beginning but he did rally and look stronger initially. How quickly things can change.

With the short life of Bandit, my husband and I decided that Liam could replace her with a new hamster. This one is Bugatti, a Russian hamster, complete with racing stripe down her back. Already, she is more confident, friendly, curious, burrowing, climbing, exploring and sweet. She is healthy and had a nice solid poop on my hand just to show me how healthy she is. bandit has loose poop which was my first clue there was something wrong.  If you looked in Bugatti’s cage right now, you would think it’s empty, but that’s only because she’s asleep under the bedding.

Ah the joy and sadness that comes from raising animals. With the good times and the bad, I still wouldn’t give it up. Thank God I have the world’s most understanding and wonderful husband alive. 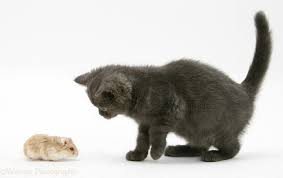 “Well Slinky, our humans are definitely mad as hatters.” Smudge glared at the strange tailless mouse in the tiny cage.  His perfectly smoothed fur and debonair face looked quizzically back at Slinky.  “Why would they catch it and not eat it right away?”

“Because, if they catch it and put it in one of these things, it means they plan on keeping it.  My question is how do we get it?  I’m hungry.” Slinky, the slightly pudgier of the two felines confirmed what Smudge had been thinking.

The two felines were best mates.  Although Slinky was slightly older, Smudge always appeared more suave than Slinky.  Humans were often heard referring to Slinky as “being more like a dog”.  Smudge thought this was an insult to all felines, but Slinky was nonplussed by such comments.  He felt that he was always accepted as he was and if that meant that he seemed dog like because he was affectionate and followed his humans around to get what he wanted, that was alright.  Smudge could be so aloof sometimes.  Slinky was more playful than Smudge, especially if someone had some catnip.  He was a fiend for his nip.

“Slinky, get your head out of the clouds.  You’re always daydreaming,” demanded Smudge. “How are we going to get the mouse thingy?”

“Are you sure it’s  a mouse, Smudgy? I mean, it has only a stub of a tail.  And it’s ,well, beige! Have you ever seen a beige mouse with gray ears?  And for that matter, it’s too big to be a mouse but not as big as Bellatrix was.  She was huge and she had no tail.”

“That’s because she was a guinea pig, stupid.  We could never eat that in one sitting.  But this thing looks like so much fun to play with and eat!” Smudge was very adamant that this was perhaps not an ordinary mouse like the ones they had caught so many times before.

“Well, maybe they caught it so they can play with it.  We never share ours with them.  Maybe they were jealous.  Maybe they are making it nice and fat before they let us have it!”

“Now that would be something!  I like the way you’re thinking.  But why now?  Slinky, humans, even our strange humans do seem to like other species besides us.  What if they plan on keeping this mouse as a pet?”

Slinky, his jet black fun shining in the warm sunlight, licked his polydactyl paw, thinking this over.  “Well, you do have a point, Smudgy. However, I’ll give you one reason for each of my toes on this paw so that makes 6.”

2. We are the supreme pets.

3. We deserve special treats more than the dogs do.

5. Even if we don’t get to eat it, we can watch it run around the cage and try to bat at it.  This thing is crazy fast.

and 6. We want it and we always get what we want.”

“Slinky, you and your 6 toes and those are the best reasons you can come up with?  It’s no wonder humans are still ruling the world, or at least they think they do.”

Smudge and Slinky sat quietly staring at the mouse thing  saying nothing to each other.  Each was lost in his own thought.  Slinky was thinking about when his owner was going to have another tub of yoghurt while Smudge was pondering another method of world domination.  Nothing out of the ordinary for a Monday afternoon. Then the mouse thing ran up the little slide and said something to them.

“Hi cats.  I have a name.  I’m not going anywhere either and you don’t get to eat me, so get that crazy notion right out of your pretty little heads. I am a hamster.  My name is Creamsicle.  No, I did not choose my name anymore than you chose yours.  I could have been Daisy or Petunia or Maisy, but no, I’m bleeding Creamsicle. So, don’t even think about getting me or about dominating my world.  I am now a pet of this house like it or not. Got it?”

Both cats jumped off the desk sending papers flying everywhere.  Oh no, what would the humans say? Would they be lucky?  Would they blame the dog?  The boys were scared out of their wits.  It spoke and it had a name and it wasn’t afraid of them!  Now what?

Slinky spoke first.  “Okay, well looks like we have to share the humans with yet another thing.  And it said it was a ham-ster. I’ve never heard of one of those, but I still say it’s a mouse with no tail. I’m not scared of it though.”

Smudge was a bit more timid than before. “Well, hamster or mouse, I think I’ll maybe keep my distance.  I didn’t like the look in that things eyes.  And it understood what we said.  It speaks feline.  How is that possible for goodness sake. Now I’ll have to plan some other recreation for myself that doesn’t include that thing.  The rabbits are interesting but they are huge and there’s something about that gray one.  I don’t trust that one either.  I think I’ll just go back to my window for a little while and think about things.”

“Do what you like.  You always talk the big talk, but you really are a scaredy cat.  I mean, really, how can you be afraid of a little thing like that?”

“Did you see the teeth? Look at those beady little eyes.  I don’t trust anything with beady little eyes like that.  And to think it talked that way to us.  It’s a bully.  It’s not like any mouse I’ve ever met.” Smudge shuddered.

Smudge wandered back to his window wearily but sat with his eyes slightly open and fixed on the cage with the hamster.  Slinky, on the other hand, was amused by the little hamster and decided to get to know this little creature better.  Always curious Slinky.

Slinky spent the next 2 hours curled up beside his new little friend.  They told stories of how they had come to be here in the house of Conran.  Slinky assured Creamsicle that these humans were caring and wonderfully kind and would take the best care of her.  All she had to do was trust them like he did and the rest would just happen.